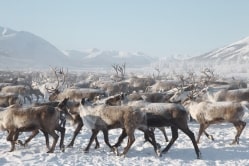 According to TASS, the main reasons for the reduction are associated with the death of animals from exhaustion and low survival of reindeer calves.

In 2018, the number of domestic reindeer livestock decreased from 156 thousand to 146.4 thousand due to the late opening of auto winter roads while an abnormally warm winter. This led to a later delivery of animal feed for reindeer, Chairman of the Government of Yakutia Vladimir Solodov told Tass.

As of January 1, 2019, the number of reindeer in all categories of farms in the Republic of Sakha (Yakutia) is only 146.4 thousand, compering to last year’s 156 thousand.

The main reasons for the reduction of reindeer numbers, according to Solodov, are associated with the death of animals from exhaustion and low survival calves. Thus, in 2018, slightly less than half of all born calves survived (46.7% or 32 thousand) throughout agricultural stocks of the republic.

“At the same time, due to addtitional feeding of reindeer with concentrated feed and salt, it was possible to preserve the population of the main herd of reindeer in the republic,” said Solodov.

According to Solodov, the main task of the authorities is to stop the reduction and to ensure the stability of reindeer numbers. “The next step is to increase the depth and innovativeness of processing reindeer products. It is necessary to increase sales of meat, hides, camus, and antlers processing,” said the head of the regional government, noting that the industry has a high export potential. Solodov added that the authorities of Yakutia, together with partners from South Korea, are planning to open a laboratory in Yakutsk to study the properties of reindeer antlers for the production of cosmetic products.