The Fight for the Reindeer

By Juliana Hanle, the Delacorte Review. 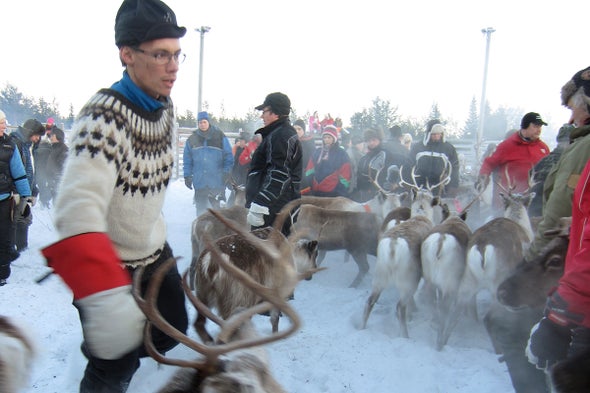 In bad winters, when reindeer cannot reach lichen on the ground, reindeer herders in Scandinavia ski into the woods and knock down dead limbs—for Miriam Lanta, it’s fun work, although the reason is not. A single reindeer can consume eight pounds of lichen a day. But tree lichen—knotted fungi and algae, curling to create its own shade—grows as slow as a fraction of a millimeter a year, clotting over decades in dark webs on old arctic trees. And on a dark November night in 2013, in her kitchen in Jokkmokk, Sweden, over coffee with her mother, Helen Swartling, Miriam told me that the year before, herders in her family had entered a forest stand where they harvest lichen to find only stumps and sky.

Without warning someone had cut down the trees, and without the trees, the herd could not survive a bad winter.

What will you do? I asked.

Miriam took a long pause. Then she replied, "Something's happening in the Sami community. It's kind of small, like when a tree starts to grow”—her hands summoned a sprout—“you see the signs.”

What was happening was something completely new to the indigenous Sami reindeer herders of northern Scandinavia. For thousands of years they had followed the weather, waiting for snow to move their herds from summer to winter pastures. But the downed trees were evidence that their way of life was threatened. Open pit mining was coming to the Sami’s herding grounds and with it would come buildings, roads, and railroads, all welcomed by new policies in Sweden and Norway. The development would eradicate forest and tundra and cut migration routes. All of this made worse by climate change.

For thousands of years, the Sami had endured in the harsh Arctic by working together. Protest had never been a part of their culture. But that was about to change.

Continue to read the arcticle