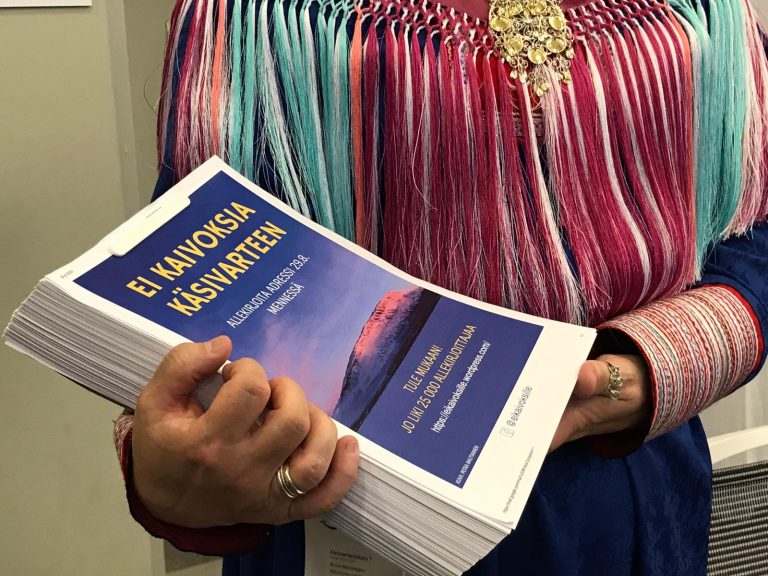 The signatories are calling on the government to stop giving licenses to companies that want to exploit the natural resources of the traditional Sámi homeland area.

A group of Sámi campaigners has handed over a petition with 37,200 names to the Ministry of Environment, protesting at plans to designate vast areas of their traditional homeland area for mining exploitation.

Minister Krista Mikkonen (Green) received the petition which gathered support from politicians and celebrities as well as members of the public.

The petition was launched in June in response to the Finnish Safety and Chemicals Agency Tukes approving an application from a mineral exploration company during the spring. The signatories are demanding that the Dutch company, Akkerman Finland Oy, leaves the area in a part of the country known as the ‘Arm of Finland’.

One of the delegation who handed over the petition on Wednesday morning was Minna Näkkäläjärvi who said she thought it was well received by Minister Mikkonen.

“I was pleased that she said it was a priority, and she will take care that our messages will be taken further into this mining law consultation process. I was very happy when I heard she was really interested” says Näkkäläjärvi.

Why is this area so important to Sámi people?

The Arm of Finland is a narrow strip of land between Norway and Sweden, and one of the last areas in Finland where the traditional model for Sámi reindeer-herding, with siida village collectives, has been maintained and is still in use.

Minna Näkkäläjärvi says if mining companies were allowed to exploit the area’s natural resources it would have a deeply damaging impact on the lives of the people who live there and work on the land.

“It would be devastating. Because we can’t any more do our traditional reindeer herding in that area. We should stop with that and we should, I don’t know. Sámi culture would die also at the same time in our area” she tells News Now Finland.

“And the effects would be to the whole Käsivarsi reindeer herding area. It would put a domino effect and these mining companies would come more and more to this area” she adds.

The Sámi homeland are is 35,000 square kilometres in total, however the area available for traditional Sámi livelihoods there has been reduced and fragmented by the demands of other forms of land usage ranging from roads, construction and logging to tourism, wind power and other large-scale projects.

In this native region, the Sámi have linguistic and cultural self-government. According to the Finnish constitution the indigenous people Sámi have the right to maintain and develop their own language and culture – which in turn depend on traditional Sámi livelihoods.