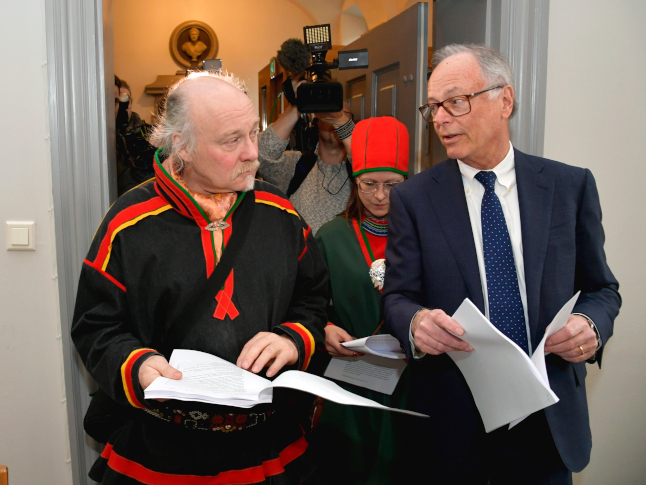 A ten-year legal battle came to an end on Thursday, with Sweden's top court ruling in favour of a Sami association against the state.

The case, which has been going through the courts for more than a decade, concerns conflicting claims about who has the right to make decisions about hunting on lands traditionally used by the indigenous Sami people for reindeer herding.

"We have reached the conclusion that this Sami association, Girjas, have the exclusive right to administer hunting and fishing in the area that is contested," judge Anders Eka told AFP on Thursday at the Stockholm courthouse.

"Both in terms of hunting themselves and to decide on permits for other hunters," Eka continued.

But the court cited the association's right by tradition "from time immemorial", meaning the Sami association had proven it had used the lands for centuries.

In the ruling, which was met by applause from representatives of the minority group dressed in colourful garb, the court said the right extended to the association's entire area, with the exception of arable land, and that it could henceforth be exercised "without the state's approval".

The verdict had been greatly anticipated.

The case started in 2009 when the Girjas Sami sued the Swedish state for the rights.

"It feels great, but I wouldn't want to call it a 'win' per se, the Swedish justice system ruled that we were right in an issue of legality, we got justice," Mats Blind Berg, head of Girjas Sami association – or Sami village as it is also called – told The Local.

Girjas' territory covers some 5,500 square kilometres around the northern towns of Kiruna and Gällivare, and their legal battle has been supported by the Swedish Sami Federation (SSR).

The Sami association challenged a 1993 reform that allowed other hunters and fishermen the right to hunt small game and fish on the territory, under the administration of the state, which has owned the land since the end of the 19th century.

Chancellor of Justice Mari Heidenborg, who repreesnted the state, said that while the ruling was disappointing she was "glad for the Sami association".

"This has been a prolonged and tough process… so congratulations to them," Heidenborg said.

Anders Eka, who presided over the case, stressed that the immediate consequences of the ruling only concerned Girjas, but added that since the court's decisions were prejudicial the arguments considered could be raised in other cases where the interests of Sami associations and the state clashed.

Heidenborg said that, while the case could have consequences for "large areas" of Sweden, how this ruling should be applied was at this point a question for politicians.