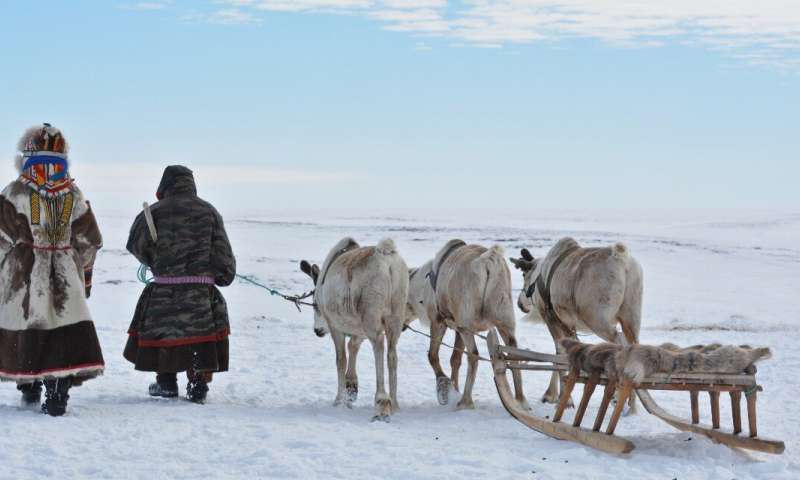 Source: Phys.org. A University of Alberta anthropologist has found what might be the earliest evidence for domestication of reindeer in the Eurasian Arctic. While examining the remains of ancient dogs at a site called Ust'-Polui near Salekhard in northern Siberia, Robert Losey and his team unearthed a number of artifacts that appeared to relate to reindeer harnesses, which radiocarbon dating has determined to be about 2,000 years old.

In May and June of 2019, Losey's team spent a month living with contemporary Indigenous Nenets reindeer herders on the Iamal tundra above the Arctic Circle. The Nenets scrutinized replicas of the artifacts and identified them as headgear parts for training young reindeer in pulling sleds.

"We weren't sure about any of these artifacts—what this stuff was, or how it works," he said. "It's just a bunch of straps, and antler pieces and swivels—a confusing mess."

Previous studies have suggested that reindeer domestication started only a few hundred years ago in northern Europe, perhaps as early as the 11th century in northern Siberia, based on evidence of genetic changes in reindeer, said Losey.

However, many have long suspected domestication began much earlier.

After examining the barbed headgear parts, the Nenets concluded they must have been used for training, since they would have been far too uncomfortable for reindeer to wear for long.

"The animal would learn once that headgear is on to stop resisting; then you could forgo the training gear and use a simpler set of headgear meant to be worn all the time," said Losey.

Reindeer contribute to the lives of contemporary, pastoralist Nenets "in almost every way possible," said Losey, forming the basis of their pastoral economy. They are sold on the market to buy snowmobiles, other forms of food, even cellphones and computers.

People still herd reindeer from northern China, "all the way through Russia into the Arctic," he said.

In his study, published last May in the Journal of Archaeological Method and Theory, Losey argued that anthropologists have tended to focus too narrowly on changes in the bodies of animals as evidence of domestication.

Equally important is understanding the relationship between humans and the animals in question, argued the study's authors, since domestication will "not necessarily be marked by detectable morphological or genetic change.

"Domestication is a human-animal relationship involving practices, materials, socialization and, as we highlight here, mutual enskilment," they wrote.

"We need to look for evidence for all parts of the process of domestication—the bodily changes, but also the material things that people use in working with animals and training them to live in that particular domestic environment," said Losey.

He pointed out that the Nenets have worked with reindeer their entire lives and are familiar with how the animals' behaviour changes during different life stages and in different seasons—all of which can be "read into the artifacts placed before them," said Losey.

"If you want to learn about how domestication occurs, talking to people who know those animals best is critical."

He added that consulting with Indigenous people about how material objects may have been used will also help to "decolonize archeological practice" and create "novel opportunities for collaboration, and profound new insights on the past."