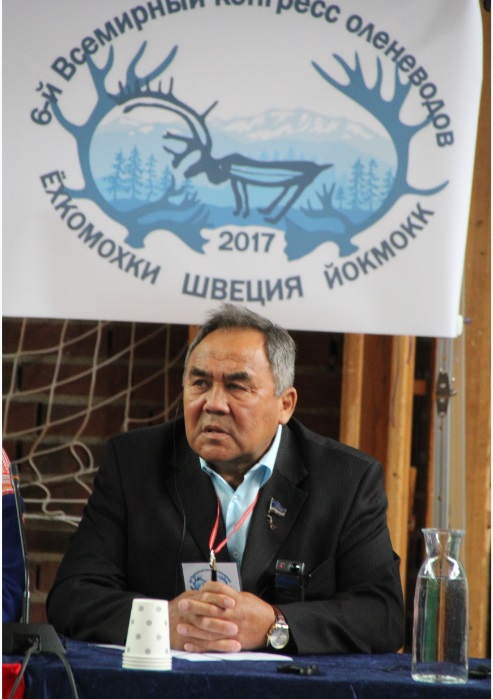 On November 26th Sergei Haruchi turned 70 years old.Sergei Nikolayevich is the President of the Council of the Association of World Reindeer Herders since 2017, and for more than 16 years Sergey headed the Russian Association of Indigenous Peoples of the North (RAIPON).

On behalf of all reindeer herders across the circumpolar north, we sincerely wish for Sergey good health, happiness and prosperity!

And for this day we recall the interview made during the Arctic Council EALAT project which was made in 2007 in Yamal:

"During the recent EALAT Information workshop (September 2007) and seminar on the Yamal Peninsula, a series of interviews were made with key people related to reindeer husbandry in the world's largest reindeer husbandry region, including Sergei Haruchi, Dmitri Khorolia and Leonid Khudi. In this feature, we are reproducing the interview with Sergei Haruchi, who is Nenets, is the State Speaker of the YNAO Duma and is the President of RAIPON, the Russian Association of Indigenous Peoples of the North.

-Thank you for very unique days on the Yamal Peninsula. It was most impressive to see how you use money to build local societies in Yamal. We have been in the tundra and we have been at the Yar-Sale seminar of the EALAT project. Please say some words about co-operation between indigenous peoples in the Arctic and the importance of having seminars like this one.

- First of all I would like to stress that the main reason for our meetings and our co-operation is the fact that our reindeer herders face mutual problems. That’s why we appreciate these meetings. We look forward to having contacts in any field. We are always happy to co-operate. You have noticed huge changes here. Our position is that whenever there is a problem we are going to solve it. If one really wants one can overcome all hindrances. The main thing is to unite the forces of local self-government, indigenous peoples’ organizations, state authorities and chief of the enterprises. The reindeer herders themselves should also participate. This way one gets the results you can see here for yourself today.

-Not only reindeer herders but all inhabitants of the North are concerned about warming. It is difficult to imagine that a real northerner would feel himself comfortable by the thought of having to live at a place surrounded by palms and eating bananas. This does not suit us. Those who are busy with reindeer herding and fishing - the nomads - notice this warming first. This is because it directly influences their way of living and their economy. We have experienced a difficult spring and summer this year. This may sound like a paradox: Temperature drops after mild periods during spring time, caused several layers of ice on the pastures. This brought the reindeer big trouble. In addition to this the summer was hotter than ever before in the arctic. Also this caused problems to the reindeer. It influences people’s life and economy.

-You are also responsible for all other indigenous peoples in Russia. In Norway, Sami reindeer herders are worried about the oil and gas development and the pastures. Could you give them some advice as to how to proceed in the future?

-Here we are talking about mutual interests again. It is clear that no country can develop its economy without taking into use its natural resources. First of all oil and gas. Thus there is an economic necessity from the point of view of the State. But this matter has also another side. How is this going to influence the environment and traditional economic activities? Here we choose the golden middle road. It is very easy to declare each others to be enemies of the State. But there exists also another and more civilized way. This is the track of dialogue and co-operation and mutual problem solving by both the protagonists of traditional economy and the industrial sector. The first task is to minimize the impact on the natural environment as much as possible. The second task is that this or that development shall not make the situation for the other part worse. Last but not least everything is depends from the concrete leadership of an enterprise and the indigenous peoples’ community (obshina). The key issue is to which extent they show wisdom. This will be decisive for relations between the workers in the industrial sector and in the primary sector. Co-operation, mutual understanding, complementary behaviour and consulting each others is the only and the best way. The alternative is to declare war, but this has never brought any good to anyone.

-One of the results of yesterday’s work was the idea to establish a Nenets Institute in Salekhard. Could you please comment on this?

- First of all we would like to thank you for your hospitality and all you have done for the EALAT- project. Both here and in the arctic co-operation as a whole. I understand that you are positive to developments in the Arctic. Oil and gas and reindeer herding can exist side by side. Is that correct?

-Our regional Duma of the Yamal Autonomous Area has twice discussed these questions at its meetings. The first time we discussed the environmental situation and the health of the population in the region, especially in the rural areas. This was directly connected with human activity in the traditional economies, first of all reindeer herding. The second question was about co-operation between State authorities, the oil and gas sector, the agricultural sector, and the indigenous peoples communities (obshinas) on local self-government under conditions of natural resources exploitation. All this is fully connected with the same issue. As it turned out we have got a lot of experience. Why this is so? You have probably observed developments in our country. During the very difficult 1990-ies and in the beginning of this new century we haven’t had any serious conflicts of interest on our territory. Here the world’s most powerful energy complex and large scale traditional reindeer herding do coexist. Not a single conflict! One would think that these two absolutely opposite cultures already for a long time ago would have come in conflict with each others. But we managed to turn events in a different direction. Today reindeer herders, oil and gas people, road builders and fishermen co-operate successfully with each others. The legislative organs have adopted progressive legal mechanisms which stimulate this co-operation of everyone who lives at the territory of our autonomous area.

-In the EALAT Sami delegation there are young Sami students. Could you say some words about how we may use your experience to improve the already good co-operation between young indigenous peoples’ organizations in the Arctic even more.

-We may not only improve this co-operation but we are obliged to do so. If we don’t do it, we don’t think about tomorrow, about our peoples’ future. Development of good co-operation will then come to a halt and this may be fatal in the end. That’s why we must have exchanges between youth organizations and why our youth organizations must not only co-operate on issues connected with reindeer herding but also in other fields.