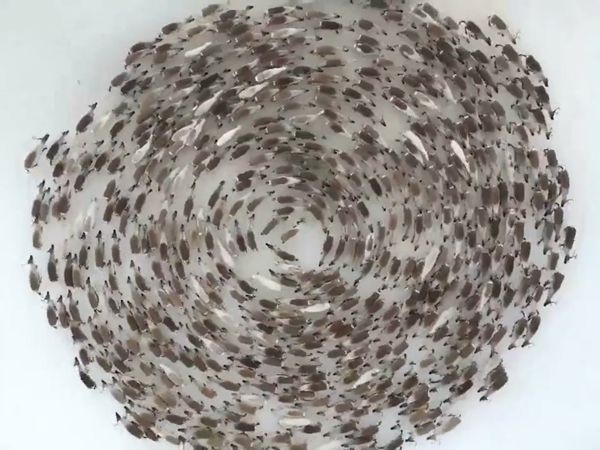 The footage was captured in Russia's Kola Peninsula in the Arctic Circle.

A mind-blowing video captured by a drone camera is doing the rounds. Taken in Russia's Kola Peninsula in the Arctic Circle, it shows a herd of reindeers circling around each other in a 'cyclone' like formation.

The breathtaking yet hypnotic footage was captured by a Russian photographer named Lev Fedoseyev in Murmansk. This was right before a veterinarian was about to give them anthrax vaccinations. It was filmed on March 24.

With the fawns right in the middle, the reindeer ran in a circle one after the other. Looking at it from the top, it will indeed captivate you and might make you a little drowsy as well.

"Reindeer Cyclones are a real thing... a swirling mass of threatened reindeer stampeding in a circle making it impossible to target an individual.. here the fawns are in the middle," the caption said. Originally, the clip was posted on the Museum of Anthropology and Ethnography Peter the Great or 'Kunstkámera' 's Facebook page. It is situated in St. Petersburg.

The purpose behind this swirling formation is to protect the herd from any kind of predatory attack. It confuses the animal in question as it is not able to track its prey at all.

According to the Daily Mail, the reindeer can run up to 50 miles per hour, which is around 80 km. In the spring, they tend to form a 'superherd' that consists up to 5,00,000 such animals.

The fascinating clip went viral instantly. Since posted on March 30, it garnered 2.6 million views with 14,900 retweets and 61,000 likes.

Netizens were definitely intrigued by what they saw. One desi netizens was reminded of the famed 'chakravyuh'. "Reminds me of an ancient Indian war formation called chakravyuh. The story goes that only very skilled warriors knew how to break that formation. The great warrior Arjuna had described how to break it to his pregnant wife," she said.

Another user sadly added, "Animals can sense their death."

Indeed, nature has a lot of things in store for us. It can surprise us but, at the same time, terrify us as well.