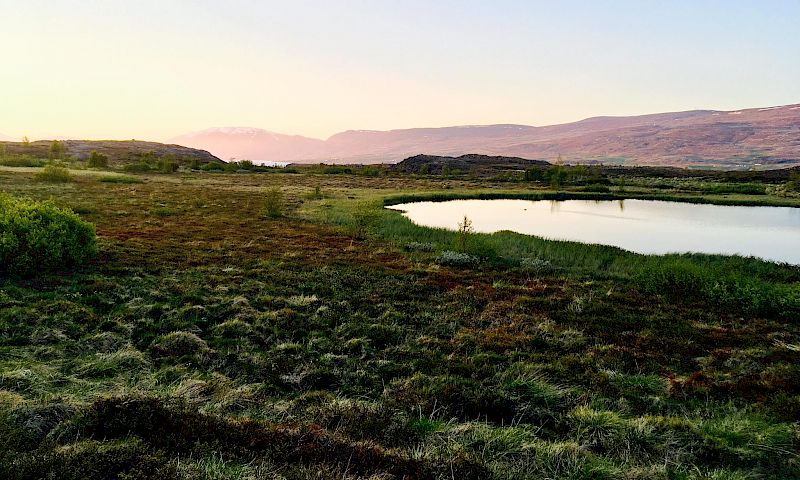 In the last three centuries, wetlands have reduced by 85% globally, three times faster than forests. Internationally, wetlands have lost 76% of their species over the last 40 years and nearly one million species face the threat of extinction, many of which live in the Arctic. This magnitude of biodiversity loss has a major impact on Indigenous communities who rely on wetlands and these species for their livelihoods.

Wetlands are a critical environment for Arctic ecosystems, species and peoples, and Indigenous peoples play a significant role in sustainably using and managing the areas. However, their close ties to wetlands is not well-documented in the Arctic. To assess Indigenous participation in protected area management, Victoria Qutuuq Buschman, an Iñupiaq Inuit wildlife and conservation biologist, worked with the Arctic Council’s Conservation of Arctic Flora and Fauna (CAFF) Working Group as a Fulbright-NSF Arctic Research Fellow to develop the Arctic Wetlands and Indigenous Peoples Study.

The study is part of a larger initiative within CAFF, Resilience and Management of Arctic Wetlands, which aims to strengthen engagement on the roles of wetlands as a resource to support sustainable development and resilience in the Arctic.

“Some people think of the Arctic as an empty space, but 60 percent of the Arctic is made up of wetlands, and there are communities across the Arctic that are situated near and within these wetlands,” says Victoria Buschman, who is currently a sixth year PhD student at the University of Washington. In her report, Buschman identified challenges and suggestions for developing participatory processes for conservation efforts that are inclusive of Indigenous perspectives, resource needs and knowledge.

“Around 34% of Indigenous communities are engaged in the management of wetland protected areas,” said Buschman. “Indigenous communities inform a lot of what is happening on the ground, especially because most management authorities do not have eyes on the Arctic at all times of the year. Often Indigenous peoples have really interesting solutions to conservation and management problems that do not necessarily fit into our standard prescribed set of actions when we establish a protected area or manage a species. There is a lot that can get lost when Indigenous peoples are not involved.”

"There is a lot that can get lost when Indigenous peoples are not involved."VICTORIA QUTUUQ BUSCHMAN

Indigenous peoples have significant ties to wetland protected areas in the Arctic, and understanding these ties is important for biodiversity management. “It is critical to understand how Indigenous communities use different water resources, the species that live there and what changes are occurring, because that allows us to get a read on biodiversity status and concerns,” says Buschman.

Arctic wetlands contain a number of species of flora and fauna that are important for Indigenous livelihoods and food security. According to the study, at least 83% of surveyed wetland protected areas support Indigenous subsistence activities. 74% of these areas are used for hunting, 66% for fishing, 46% for herding and 43% for gathering.

“Sámi reindeer herders rely on wetlands as places to migrate, pasture, rest, milk and calve their reindeer. This is one very obvious example in the European Arctic of how wetlands are critical to the longevity of Indigenous livelihoods and cultures,” says Buschman.

Despite the relationship between biodiversity and food security, wetlands conservation can actually be a driver of Arctic food insecurity. For example, sanctions against the subsistence of certain wildlife species that are locally important can create health, economic and cultural challenges in Arctic communities. Thus, the study notes that it is important to consider that biodiversity conservation can both support and inhibit Indigenous food security. Managers need to work with communities to ensure that conservation efforts respect and accommodate Indigenous communities’ ability to continue their livelihoods.

“When management does not consider local contexts, it ignores the human dimensions of biodiversity conservation, and it ultimately is a disservice to our efforts.”VICTORIA QUTUUQ BUSCHMAN

“There is a major gap in understanding how Indigenous communities use wetlands resources,” states Buschman. Most wetlands management and conservation plans do not document Indigenous resource use, leading to an incomplete picture of overall resource use and management within the areas.

“One of the problems is that management plans for protected areas often list the globally critical and endangered species and focus on those. These plans overlook the species that are more locally important or endangered, or the species that are critical to food security on a local scale,” says Buschman. “When management does not consider local contexts, it ignores the human dimensions of biodiversity conservation, and it ultimately is a disservice to our efforts.” 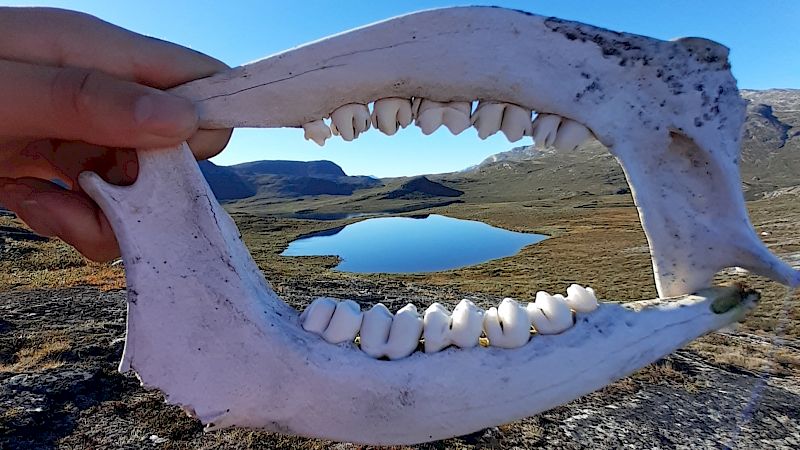 “Biodiversity is not just about keeping the number of species high and ensuring that none go extinct,” she adds. “It is also about ensuring that the local patchwork of all the species, and the relationships that are there, remain as intact as possible under threat of climate change. If those relationships are not intact, we might see real problems 20 or 30 years from now. The wetland uses and knowledge that Indigenous communities have are really telling about what is happening on the ground. And communities should be more meaningfully engaged with the way that conservation targets and goals are structured.”

"Not only do we need to improve access to education, but we also need to accept that having a degree is not necessarily a qualification to be part of biodiversity management processes. Indigenous peoples have voices and perspectives that are important to capture, and you do not need a sophisticated education for that.”VICTORIA QUTUUQ BUSCHMAN

“Indigenous communities are already doing a significant amount of work happening in the Arctic,” says Buschman. “Maybe not in the organization, but in the execution of managing protected areas, conducting research, establishing new protected areas and fighting for government funds to ensure that management programs can continue.”

“That said, it is also important that we open more opportunities for Indigenous youth to pursue the sciences. People do not realize the sacrifices that young Indigenous students have to make to achieve an education. For example, in Greenland, to get a degree in science, even at the bachelor’s degree level, you need to be committed to leaving the country. Improving the access and availability that Indigenous youth have to basic education without having to sacrifice their families, country or culture is really important. So, not only do we need to improve access to education, but we also need to accept that having a degree is not necessarily a qualification to be part of biodiversity management processes. Indigenous peoples have voices and perspectives that are important to capture, and you do not need a sophisticated education for that.” 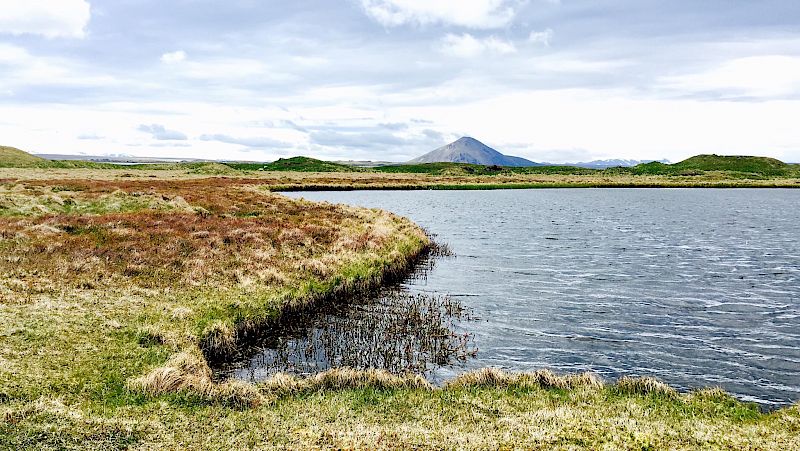 The study identifies six suggestions that could improve the management and conservation of Arctic wetland protected areas in partnership with Indigenous peoples, which can be found in more detail in the report.

5. Connect beyond wetlands to explore the interactions between and beyond inland and coastal wetlands and examine opportunities between other CAFF projects to further facilitate research on Indigenous relationships with Arctic biodiversity.

"Conservation is a social process, and we need people to be invested and involved in the decisions and the execution of those decisions.”VICTORIA QUTUUQ BUSCHMAN

“There is great potential for improving how we are engaging with Indigenous communities within wetlands resource use, management, and within protected area development and establishment,” says Buschman. “Simple consultation with Indigenous communities is not getting us where we want to go. Because of the remoteness of the Arctic, many researchers travel from afar, and a lot of the work and responsibility that is happening falls onto the communities. Conservation is a social process, and we need people to be invested and involved in the decisions and the execution of those decisions.”

The Arctic Wetlands and Indigenous Peoples Study is part of CAFF’s Resilience and Management of Arctic Wetlands initiative, co-led by Sweden and Iceland. This project aims to strengthen engagement on the roles and functions of wetlands as a resource to support sustainable development and resilience in the Arctic. The overall project goal is to use insights from scientific analysis to produce recommendations to support policy development and further develop management strategies to conserve biodiversity and ecosystem services that wetlands provide. Click here for more information.