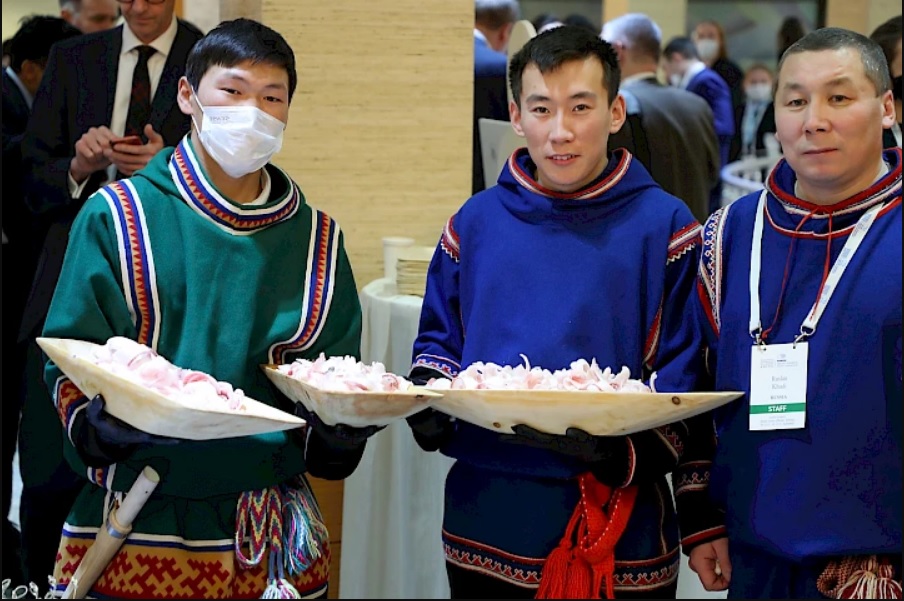 Source, photo and text from Arctic Council: The EALLU Indigenous Youth, Food Knowledge and Arctic Change project recently won the Gourmand Best of the Best Award and will present the traditional food culture of Indigenous Peoples during the Arctic Food Festival in Moscow, 10-11 December.

EALLU Indigenous Youth, Food Knowledge and Arctic Change is an ongoing project in the Arctic Council’s Sustainable Development Working Group (SDWG). The project focuses on sustainable and resilient reindeer husbandry in the Arctic in the face of climate change and globalization. Through the project, Indigenous youth from across the Arctic explore the traditional food systems of Arctic Indigenous Peoples and learn how these can be mobilized for food security, food sovereignty and economic development.

In 2018, the project participants published the EALLU cookbook, a first in depth overview of the culinary world of Arctic Indigenous Peoples, which won the Best Food Book of the Year 2018 across all categories at the Gourmand World Cookbook Awards in Yantai, China. Recently, Gourmand also honored EALLU with the Best of the Best Award as one of the top cookbooks of the last 25 years.

Now, EALLU will come to Moscow for the Arctic Food Festival on 10-11 December, an event that aims at celebrating the cuisine of the Indigenous Peoples of the Arctic, developing gastronomic tourism and economy in this region, while carefully preserving the traditions of the North.

“Many think of the Arctic as a place of climatic extremes and scarcity but what few know is that the region hosts an extraordinary food culture, which builds on 10,000 years of knowledge. This food culture is deeply connected to Indigenous Peoples’ identities and languages,” says project lead Anders Oskal, Secretary General at the Association of World Reindeer Herders and Executive Director of the International Centre for Reindeer Husbandry.

As a project designed by and for Indigenous youth, an important component of EALLU is a series of community-based youth workshops about food and traditional knowledge that aims at bridging generations, experience and understanding across the Arctic. The most recent international EALLU seminar was held in Salekhard in the Yamalo-Nenets Autonomous District, 29 November – 3 December. It brought together Indigenous youth from across the Arctic for workshops, discussions, and a trip to a reindeer camp to demonstrate the traditional approach to organizing daily life, including food. The key event of the seminar was a tasting of dishes prepared by young chefs from among the Indigenous Peoples living in the reindeer-herding regions of the Arctic. The presentation took place within the framework of the first Senior Arctic Officials’ Plenary during the Russian Chairmanship of the Arctic Council, which was held at the same time in Salekhard.