Reindeer herders & Led Zeppelin: a nice match for the holiday season! 200+ Artists Unite to Save Our Planet 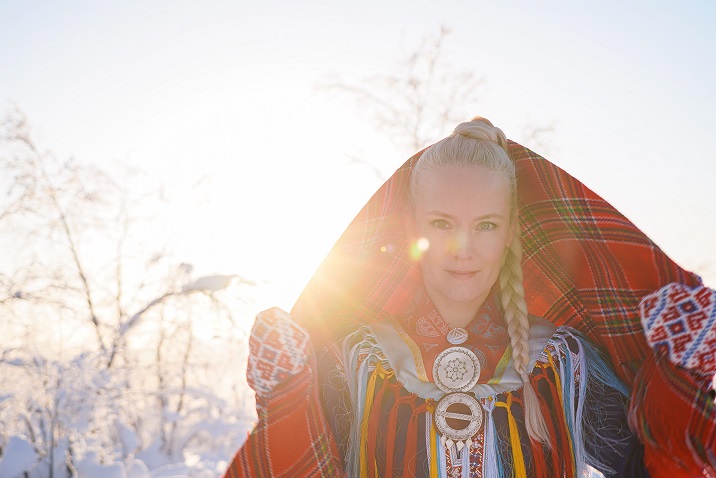 John Paul Jones (Led Zeppelin) invited a Sámi reindeer owner Elle Márjá Eira to join him in performing at Playing for Change for Peace Through Music: A Global Event for the Environment , together with many different artists all over the world. Peace Through Music is an online event that seeks to unite the world in taking action for a sustainable future, advance progress towards the achievement of the Sustainable Development Goals (SDGs), and amplify the voice of the most left behind, including Indigenous communities, whose knowledge and wisdom can help show us the way forward but is often unheard. In this connection, she made films and sound recordings in Guovdageaidnu together with Andreas Ausland and Morten H. Pettersen. She performed for the environment December 15th together with 200 other musicians around the world. Her heart beats especially for Sápmi and reindeer herding.

Elle Márjá Eira is a Sámi reindeer owner and belongs to reindeer herding district Lákkonjárga I Norway. She has written, directed and produced several short films and music videos. She has made a name for herself as a joiker and singer. Eira has created a musical expression that mixes joik, indigenous and ambient music, and with which she have performed in several countries.

In collaboration with film composer Christoph Beck, she has made joiks for The 12th Man (2017), Harald Zwart's film about the resistance hero Jan Baalsrud. Elle Márjá collaborates musically with John Paul Jones (Led Zeppelin, Them Crooked Vultures) and Lucy Parnell (Daughter) in a band project called Snoweye. Eira has been selected for the talent program UP 2.0 (2020-2022) by Norwegian Film Institute, Talent Norge and Norsk Tipping. She is now involved in several film and art projects. Photo by Ken Are Bongo

More about Playing for Change

200+ artists from 58 countries including Black Pumas, Jack Johnson, Rodrigo y Gabriela, Sara Bareilles, Slash, and The Lumineers, along with world leaders and influencers, join the fight for Planet Earth. Donate now via the blue donate button or at https://playingforchange.com/peacethr.... #PeaceThroughMusic2021 #EnvironmentalJustice Join Playing For Change and the United Nations Population Fund (UNFPA) for Peace Through Music: A Global Event for the Environment, presented by Corning® Gorilla® Glass, an online event that seeks to unite the world in taking action for a sustainable future, advance progress towards the achievement of the Sustainable Development Goals (SDGs), and amplify the voice of the most left behind, including Indigenous communities, whose knowledge and wisdom can help show us the way forward but is often unheard. Featuring performances by Baaba Maal, Ben Harper, Black Pumas, Derek Truck & Susan Tedeschi, Giovanni Hidalgo, Jack Johnson, Jake Shimabukuro, John Paul Jones, Keb' Mo', Lee Oskar, Liniker, Mickey Hart, Paula Fuga, Rhiannon Giddens, Rodrigo y Gabriela, Rosanne Cash, Sara Bareilles, Sikiru Adepoju, Slash, Stephen Perkins (Jane's Addiction), Taj Mahal, The Lumineers, The Pocket Queen, Tony Kanal (No Doubt), Yusuf / Cat Stevens, Zakir Hussain and more. Narrated by Robbie Robertson and Sir David Attenborough. All net proceeds will go to organizations that prioritize real time solutions that facilitate environmental justice and sustainability, including Conservation International, American Rivers, World Wildlife Fund, REVERB, and the Playing For Change Foundation. Part of the funds raised will advance education programs led by the Playing For Change Foundation with the support of UNFPA to positively impact the lives and choices of adolescents and youth around the globe. Get your Peace Through Music merch: https://bit.ly/PTM2021Merch PRESENTED BY CORNING® GORILLA® GLASS Corning® Gorilla® Glass launched in 2007. Since its inception, Gorilla Glass has become the glass of choice for mobile consumer electronics manufacturers around the globe. The patented, durable glass technology has been designed into more than 8 billion consumer electronic devices by more than 45 major OEMs. Formed through Corning’s proprietary fusion draw process and strengthened through an ion-exchange process, Corning Gorilla Glass continues to deliver industry-leading performance and durability with a thin, pristine surface that is ideal for the mobile consumer electronics industry as well as automotive applications. SPECIAL THANKS TO OUR PARTNER IN MAKING CHANGE: Audio-Technica—Audio pioneer in high-performance sound design Established in 1962, Audio-Technica is a worldwide group of companies devoted to the design, manufacture, marketing and distribution of problem-solving audio equipment. Initially known for state-of-the-art phonograph cartridges, A-T now creates high-performance microphones, headphones, wireless systems, mixers and electronic products for home and professional use. For more information visit: https://www.audio-technica.com